A SUMMER ON PILLS AND NEEDLES

Dateline Cahuenga Pass, August 30. It was good to be back. A series of small strokes had disarranged the components of my skull for most of the summer. I had missed most of the Hollywood Bowl season and, worse, a most interesting Ojai Festival. Now. Back again on on familiar ground I got to greet old friends –the p-r gals at the Philharmonic (their free tickets!! their press passes!!!), all the other good souls that make up the eager, bristling, Los Angeles music consumership. What treasures, our Hollywood Bowl, our Philharmonic, our crowd!

Ask Your Mama was the Bowl’s seasonal spectacular, the one yearly event planned to fill that geologic  Declivity with some kind of music likely to celebrate its own existence, fortissimo, and  inundate the bowl-shaped premises with senses-wooing sight and sound. The eponymous Mama, who casts her wisdom over an awareness was the reness of why things in the realm of black-on-white are as rotten as they sometimes can get, strides wisely through a slender and lovable  volume of Langston Hughes’   “Moods for Jazz,”: page after page of fleeting compressions of the  black-on-white life-lifestyle, many of them haiku-like in length and impact.  Laura Karpman composed or – let’s say—synthesized the songs; her Dad Harold is family physician of choice  to a broad segment of the local  music-supporting crowd, Her contribution is a credible pastiche of blues-tinted numbers stitched into some kind of song-cycle only distantly related to the better-known efforts of Schumann and Brahms. Each song purports to stand in for an expansion  on the chosen text-fragment of  Langston’s mournful uproar, and allows it to spin free.

A gathering of power vocalists had been enlisted at the Bowl to blow her music into Kingdom Come and it fairly well succeeded; it ends up as a journey through some old-timey jazz attitudes, admirably loud and radiating the comforting assurance that you’ve been there before. I missed, however, the bitterness, the seething and the irony that deservedly bear the name of Langston Hughes. The end product, sure enough, may have was the hoped-for roof-raiser. Or close, at any rate.

Chief among the noisemakers was one of Nature’s authentic phenomena in the sight and sound of Jessye Norman, whom I honored in bygone decades  for her haunting Sieglinde (on RCA’s venerable Ring) and in virtually every nameable corner of the repertory since,  an armamentum audible and physical that engulfs your every sense (including a few you never knew you had). A couple of octaves up from her wonder-work, and worthy to share  the same stage. . the artfully modulated screech of the stardust-encrusted Dnenna Freelon and the no less sizzling Aadre Aziza achieved a mop-up on whatever senses remained untouched. The pure substance of SONG filled the night-time air, song  in its pure if unrefined condition.

And yet . . .
What I also missed was a sense of modulation, of the variety in a musical progression that makes you curious about what comes next. I missed too the seething, the irony that qualify these songs to bear the name of Langston Hughes. I heard instead a couple of hours’ worth of loud songs of a single fashioning, gorgeously, sung within certain cultural boundaries. For all the skill, including  the glistening scoring handily managed by George Manahan leading the Bowl  Band, Ms. Karpman’s Mama seemed bent on answering the same question repeatedly over a lengthy stretch of time. Splendid as was the sensibility of the great opera singer – as Jessye. Norman surely are  and Mss. Aziza and Freelon on their way– I  missed the element crucial to any time-consuming form, any recognizable and credible musical experience: the sense of the right people enlisted to fulfill the most appropriate task in exactly the right place. that, after all, is what words+music aim to accomplish.

Don Giovanni had been my summer companion during weeks of convalescence; it was valuable exercise explaining to Eva, my home-care nurse, such matters as how an opera plot with such insidious overtones can elicit in such sublime music. I may have created a Mozart convert. (It wouldn’t hurt!)
No fewer than six DVD Don Giovanni’s have arrived here in recent weeks, all of them originally TV broadcasts originating in one or another European house. (The active — and therefore, precious — Naxos Company is thewn distributor of most of these.) If you’ve resisted the idea of experiencing  opera via DVD, there’s enough in his pile to challenge that resistence. Now you too can sample this operatic Golden Age that seems to have formed upon Wolfgang’s slender shoulders. Not one challenges the treasurable C D performance infused with the wisdom of Carlo Maria Giulini’s baton. Here’s just the beginnings of a sampling, part of the sustenance I have gleaned over the summer, just from that small pile of Giovannis, Nicolaus  Harnoncourt’s version can offer the wounded passion of Cecilia Bartoli’s Elvira, in a Zurich Opera production led by Nicolaus Harnoncourt, with our own Rodney Gilfry as the slender, insidious Don. 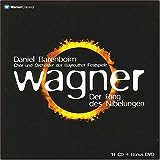 Come to think of it, the summer’s crop of operatic DVDs has greatly reinforced my faith in the home-TV medium as a worthy representative of the operatic experience. I sat quite spellbound at the reality of Die Walkuere in the Barenboim-conducted Ring as it handsomely spread through my sickroom, with a Siegmund hitherto unkown to me, one, Poul Elming, of thrilling vocal beauty and passion.

Under the baton of the great and much-missed Carlos Kleiber there’s a Der Rosenkavalier, its every antic detail lovingly etched. It stands as one Becomes one of my ten-best (or maybe even two-best) opera DVDs ever.  Of the best of all operas there is a new and wonderful  Barenboim version from Berlin, with Rene Pape’s all-knowing Figaro and the sublime Dorothea Roschmann as his Susanna. Which do I hold among the everbest opera? Surely you don’t need me for that.

A Carlos Kleiber Rosenkavalier; a  Rene Jacobs Figaro; a Barenboim Ring; throw in a loose-jointed Peter Sellars  version of Handel’s Theodora and a Pierre Boulez Pelleas et Melisande; try to sell me  that we’re not in some kind of video-centered operatic “Golden Age.” – I  am delighted to differ.

4 Responses to A SUMMER ON PILLS AND NEEDLES