ARRIVALS: My favorite Dudamel moment (so far) occurs during his 2007 performance of Bartók’s  Concerto for Orchestra – the performance in  Disney Hall, about two years into his romance with the L.A. Philharmonic and which you now can download via iTunes and buy for not very many bucks. The second movement of that wonderful work is a special delight, a scherzo built out of instruments in pairs exchanging wry jokes with an intervening serious interlude. It’s the music of an elderly but energetic great artist caught in an atypical warm-hearted mood. The young  Gustavo had brought the orchestra into this frame of mind; the music fairly gleams with its quotient of captivating  ironies. The wit content is high, but so is the tenderness, in these eight-or-so minutes of orchestral magic. Beyond all the acclaim for his daredevil orchestral command – vividly demonstrated to a sold-out, justifiably ecstatic Disney audience at his so-called inaugural last Thursday night, the word turned a little faster one night last week, to honor  the occasion of Gustavo Dudamel’s arrival at the Philharmonic podium now officially his.

He confirmed that claim in the grand manner: a challenging contrast of a familiar large-scale work and another work of similar scale, not yet known but equipped with convenient handles: a living (respectably) and well-known composer, with a scenario set on familiar nearby streets. Gustav Mahler and John Adams are not everyone’s inevitable choice as program-mates, yet the pairing carried its own message: our orchestra,  even in these harassing times, is still dedicated to the responsive listeners’ collective intelligence  as well as their tapping toes.  Add to this welcome news the tidings that the new leadership has convincingly demonstrated – on this joyous occasion last week, and on the many of similar promise in the past several years – its capability to maintain, and to strengthen, the promises held forward in the previous weeks.

We  have a marvelous orchestra on our hands, a phenomenal talent on its podium, an audience that, so far at least, simply radiates satisfaction and good will, a quality unique these days in the large concert halls of the world. It is a lovely gesture, and and a not insignificant one, that Gustavo prefers to take his bows in close communion with the orchestra members. “We’re in this together” he seems to say, and there is no better way to shape a great symphony orchestra. Nothing made this any more clear than the concert’s opening: no fanfares, no anthems, no feasting until ‘way later, and a substantial new score by John Adams that, if anything, marks a kind of arrival for the composer as well.

City Noir taps into Adams’s long-time adoration for California, a passion we Harvard-bred New Englanders are uniquely qualified to share. His California this time is the land of Raymond Chandler detectives played by Bogart, on dark streets made frantic by Barbara Stanwyck sirens. Its colors are slashing reds and purples of a cluster of tenor saxophones, with the doleful bleat of a trumpet solo to beg for our sympathy. This is not, then, the Adams of political or atomic science as a spectator sport, but rather as a master of the symphonic structure: Naïve.

Naïve and Sentimental Music, the Violin Concerto and now this. Those enamored by Adams’s stature as the harbinger of “the new accessibility” may be put off now and then by the direct onslaught of a few pages of City Noir; it is a good, deep, tough work, the arrival into unfamiliar territory by its composer, a step ahead for all of us. 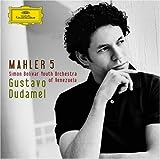 Came the Mahler First, and the music for another kind of landscape: vast. serene  and sunlit, then triumphantly aflame. Perhaps there were no real  no surprises in Dudamel’s unfolding of Mahler, this garrulous, eager music, unless you count the remarkable rapport that rendered inconsequential any presumed clash of national spirits – Latino v. Wiener in this case. (And also, perhaps. it’s high time to drop that presumption and accept the splendid compatibility, already clearly apparent, between this omnivorous new  guy in town and the musical world around him?  His radiant Mahler performances hang fiercely aglow in favoring air.. The  First Symphony’sdelicious wit, the irresistible bombast, the hundred-percent-pure brass of the ending – these combined for that enchanted evening of our fervent prayers. Yes, it actually happened. Now comes the hard work — for the abundantly able musical forces here at hand as their accomplishments light up our landscape.

MY WEEKLY HORROR STORY: Word is in, from exotic Detroit, anent some interesting policy changes at that city’s local Symphony. Seems as how conductor Leonard Slatkin plans a certain amount of rampage. Next season the Beethoven Fifth will be played minus the first five bars (the generative source for the entire symphony, remember?) “Everyone knows how they go,” explains a DSO rep. Another famous opener, the bassoon solo that initiates The Rite of Spring will be replaced by a solo tuba “Bassoonists get plenty of solos. Why not let someone else have at it?” says Detroit’s conductor, our old friend Slatkin. The orchestra will be seated with their backs to the audience. “I feel that listeners are distracted by seeing the faces of the musicians,” says Slatkin. Rachmaninoff’s Second Symphony, which normally meanders through the orchestra for around 70 minutes, will now clock in at twelve. Slatkin: “The piece is long and repetitive. Once you have heard the main themes they are so memorable that they don’t have to be played again.” Mr. Slatkin also spoke recently about producing a Bruckner cycle: the nine symphonies – which normally run over an  hour each –  plus the two unpublished ones, “ It is my hope,” he said, “to get through all of them in one concert.”

Maestro Slatkin, may I remind you, is the son of two great Los Angeles musicians, Felix Slatkin and Eleanor Aller, whose Hollywood String Quartet once performed and recorded great, honorable – and uncut – performances. Their CD of Schubert’s C-major Quintet is what I play for friends to demonstrate honest musicianship. Go figure.

FOR THOSE WHO CAN’T GET ENOUGH OF ME  (Hi, Mom!): Check out www.bluefat.com. Bluefat is John Payne’s arts Website for which I’m doing some music crit. John was my first editor at LA Weekly, and a strong critical voice in areas I cannot pretend to understand. His new site is attractive, and the ediditing is dpot-on.